Have you ever thought about from where the concept of benchmarking originated? Like most people, I never really gave it much thought. But interestingly, way back in the days before mass production and high tech equipment, adjustments to correct the performance of a firearm were carried out on a workbench. Thus the word “benchmarking” referred to the fine modifications necessary for a firearm to perform with accuracy. Over time, the term “benchmarking” evolved into the idea of businesses refining their operational standards to be in line with those of their leading competitors and/or accepted industry norms.

When it comes to establishing a benchmarking process there is no single methodology, but there are some guidelines that are often accepted which include:

In terms of collections, a major benchmarking goal to be measured is collecting as much as possible, as quickly as possible. Although this goal reads very simply, it’s an extensive assembly line process in which there are many parameters that must be carefully considered.

Periodically, the Commercial Collection Agencies of America (CCAA) publishes data on the potential collectability of a commercial account as follows: 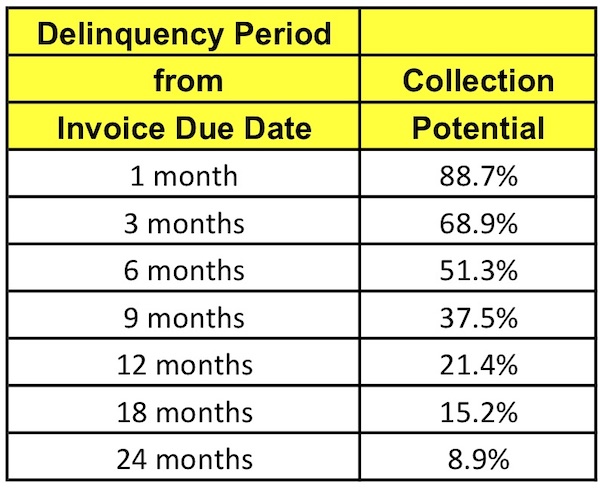 In a perfect world and in view of the above data, if every time a claim at a 6-month delinquency point were placed with an outside agency, one could presume there is a 51.3% chance of collecting it in full. If it were collected, we could assume that the agency’s performance is in line with the established benchmarking data above. If it weren’t collected, a review would be required to focus on where collection efforts need improvement. In either case, without a firm understanding of the underlying parameters that impacted the result, any comparison against a benchmarking standard would not tell the whole story.

And since we work in a very imperfect commercial collection world, we need to identify the multitude of parameters involved in determining the collection potential of a claim. These parameters fall into a process I refer to as “Collectability Scoring.”

Subsequently, the total average collectability score that results from a significant pool of all the claims with the same parameters will become the internal benchmark figure.

Let me give you a simple example using two claims.

Up to this point, in looking at the two claims, we can see that the delinquency period parameter plays a more significant role in the collectability score than the claim amount parameter.

Let’s now factor in the parameter for the skill of the collector, since this will also greatly impact its collectability.

You may be asking, why did we add the parameter rate for collector experience rather than multiply it against the other two parameter rates? The answer is that as we identify each parameter, we have to think about how it logically interacts into the collectability potential. It may be necessary to add, subtract, multiply, divide or perform a more complex mathematical function. In addition, you have to analyze whether the parameter should increase or decrease the collectability score.

There is no rule as to how the formula is created and developed other than to ask yourself, does it make sense and can the formula’s logic be applied to future claims? If the formula reasonably stands the test of time then it’s reliable. If not, then changes to the parameter rates and/or the formula need to be made.

Many parameters fall into one of the following areas:

Just like the benchmarking refinements mentioned at the beginning for a firearm to shoot accurately, years are often spent continuously analyzing collection data by comparing forecasted with actual results. In addition, the algorithms created are reworked many times over in order to obtain a range of accuracy that can be applied to future claims.

So where does all this take us? Although using external benchmarking figures is a good first step to understanding how well your organization is performing, it’s pulling apart and carefully analyzing the small details in the process that will truly indicate what’s happening. In doing so, you will discover the areas that need improvement and over the long term, your own benchmarking standards of operational efficiency may eventually become recognized as an integral part of the industry’s published standards.

This article has been edited by Steven Gan.