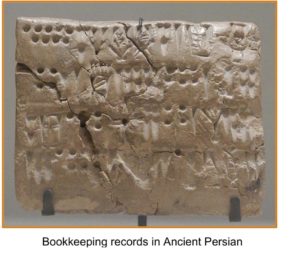 In which ancient kingdom or empire were the concepts of accounting first developed?

Accounting records dating back more than 7,000 years have been found in Mesopotamia showing lists of expenditures and goods received and traded.

Other early accounting records were found in the ruins of ancient Babylon, Assyria and Sumeria, which also date back more than 7,000 years as well. The people of that time relied on primitive accounting methods to record the growth of crops and herds. Since farming and herding were very seasonally based, it was easy to count and determine if a surplus had been gained after the crops had been harvested or the young animals weaned.

Between the 4th and 3rd centuries BC, the ruling leaders and priests in ancient Iran oversaw financial matters. Cylindrical tokens that were used for bookkeeping on clay scripts were found in buildings that had large rooms for the storage of crops. The invention of a form of bookkeeping using clay tokens that described assets and liabilities represented a huge developmental leap.

From about the 4th century BC, the ancient Egyptians and Babylonians had auditing systems for checking movement in and out of storehouses, including “audit reports,” resulting in the term “auditor.”