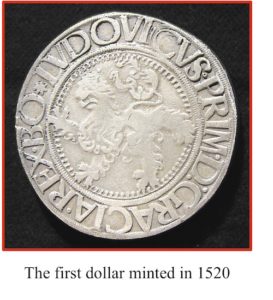 As recognized by the United Nations, there are currently 180 currencies across the world. Among all these currencies, how many countries do you think call their currency the “dollar?”

The “Dollar” (symbol: $) is the name of 20 currencies, including those of Australia, Canada, Hong Kong, Jamaica, Liberia, Namibia, New Zealand, Singapore, Taiwan, and the United States. The U.S. dollar is also the official currency of the Caribbean Netherlands, East Timor, Ecuador, El Salvador, the Federated States of Micronesia, the Marshall Islands, Palau, and Zimbabwe. One dollar is generally divided into 100 cents.

On January 15, 1520, the Kingdom of Bohemia (in Germany) began minting coins from silver mined in an area of the kingdom known as Joachimsthal, and marked on the back side with the Bohemian lion (see image above). The coins were called “joachimsthaler,” which became shortened to thaler or taler. This name found its way into other languages such as:

On April 2, 1792, the United States dollar was defined as a unit of pure silver weighing 24.057 grams. It was further specified that the parts of the dollar be defined as half-dollar, quarter-dollars and so on, each containing a corresponding percentage of the silver used to make them.